The Plate is Rather Full... 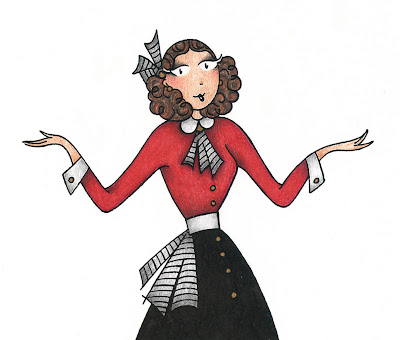 ... but I thought I'd drop by, and provide a couple of updates. First off, the new Singapore Slingers CD is in the final tweaking stages - Matt is polishing up the last of the liner notes, and the illustrations for the cover are complete. A touch of digital magic, and the separately-drawn album title will be added to the cover. I am distinctly fond of the results - like the last warm breeze of an Indian summer, the colors and lines are fluid and soothing. I can't wait to see the CDs arrive in early May, finished and professionally-manufactured - once that happens, I'll post the illustration (and ordering link) here. It goes without saying that the recordings are downright delicious.

Over the coming week, weather permitting, I'll be working on the hand-painted sign project that came along recently. Up to this point, the progress has been on paper exclusively - making certain that my client is happy with the overall appearance, before enlarging it to a 4 x 11' exterior painting. If I fail to update the blog over the next week (or two, should it rain), it's likely I'm spending more time on a scaffold than I had expected. Of course, the payoff is that I'll post the results here - and while the project is very basic (simple white-on-red letters/numbers), I'm sure to be proud of it. If nothing else, it will give me the opportunity to use elastomeric paints - and I am very excited about that.
Posted by Danielle Bennignus at 7:16 PM No comments:

A Constant Source of Influence 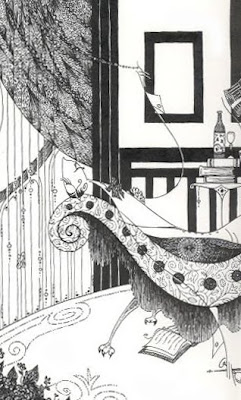 If I neglected to mention before now, I'm a nut for dandies, and the practice of dandyism. Whether that's an actual word or not doesn't matter a hang to me - as far as I'm concerned it's a fully legitimate art form, and worthy of a title. The great author Max Beerbohm considered it the most generous of arts, as the dandy himself bestows his creation upon all who see - rich and poor. Rather than relegated to the gallery or museum, the dandy's work is truly public in nature.

I'm inspired to write a bit about this today, as I've recently begun reading a biography on Stephen Tennant, one of the last of the true "exquisites". Though confined to his bed a great deal during his life, he spent his time lavishly among other artists and socialites, surrounded by beauty in many forms. Here's a famous photograph of the man in question: 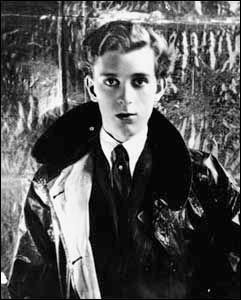 To a far stronger degree, some years back I fell head-over-heels with Aubrey Beardsley, the divinely gifted illustrator who created a sensation in the late 19th century. And though it was his artistic contribution that started my obsession, I couldn't help but admire the heck out of his sense of personal expression. He was painstakingly collected, disciplined in his clothing and scrupulously clean (particularly for his time). He passed away at 25 years of age, but not without leaving behind an astounding legacy of beautiful work - in my opinion, so far ahead of its time that we still haven't caught up with him. One of the more well-known photos, a copy of which hangs - always - before my drawing board: 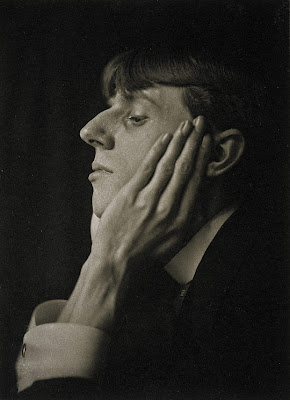 So help me, I love him more today - years after I first fell under his spell.

This reflecting reminds me of the day I was lucky enough to walk past the late Quentin Crisp - a man memorable for both his eccentric dress, as well as social commentary. I'd admired him before moving to New York City, particularly for his outspoken nature regarding his homosexuality, at a time when the lifestyle was a dangerous one. I was strolling up First Avenue, and felt a curious presence - I looked up, to see Mr. Crisp. His lilac pompadour, paisley jacket, flowing scarf and heeled shoes were enough - but his gentle, mincing walk and pristine expression made me want to stop, and bask a little in his energy. I was muted, too intimidated to say hello... and found out about his passing less than a year later. I regret the missed opportunity to introduce myself, but recall very warmly that little moment.

Here's to dandies, and their particular discipline. The drawing at the head of this entry is a detail (poorly scanned, I regret to say) of a piece I worked on about ten years ago - it features two dandies, in a decadent drawing room scene. I'd love to do more in that vein... such wonderful creatures.
Posted by Danielle Bennignus at 5:26 PM No comments:

Home of the Whopper 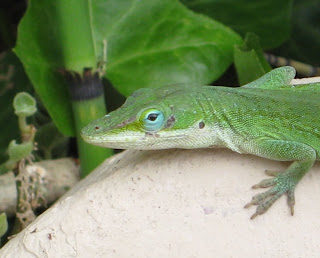 I know I've mentioned (and posted an illustrative photo of) the anole lizards that inhabit our front garden. However, this one warrants an entry of his own, alongside news of today's commission. This fellow is named "The Whopper", as he outsizes - by far - every other anole on the porch. At about 7 inches in length, he holds quite a bit of sway - often providing us with theatrical displays of territorial wackiness (doing push-ups and fanning out his throat). His presence on this blog might seem removed from the illustrations I do, but honestly he fits in perfectly with my work. Alongside the roses, kalanchoes, voodoo lilies and sacred datura plants I nurture every day, he plays a wonderful role in my little garden, which constantly inspires me.

And now, to the commission - thanks largely to a friend here in town, I will soon be working on a large-scale sign/mural. While simple in design, the process of executing it will feel wonderful - I love working with enamels. I can't wait to get my hands on some One Shot...
Posted by Danielle Bennignus at 3:11 PM No comments: 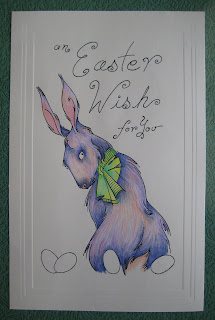 And so, as promised, I've returned with a scan of Matt's Easter card. This was tucked inside his traveling case, along with several candy-filled eggs... luckily, the eggs didn't broach any questions at the checkpoint. In a big way, this was actually a little homage to my father, who managed the same surprise for my mother years ago - she was pulled away on a business trip over the holiday, and so he snuck a German paper egg into her suitcase, filled with all sorts of goodies. I miss them both, but find ways to keep their influence deeply present.

A little close-up of a particularly endearing face: 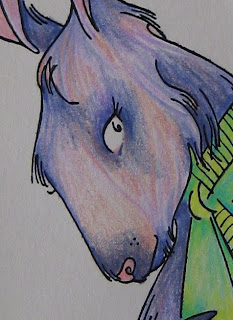 Although I'll be making some revisions before submitting this design to the larger market, it already has a great deal of character. A bit more elaboration, and it will be just right.

Meantime, the cover illustration for the new CD continues. Matt's happy with the ink drawing - the color work should be akin to indulging in a luxurious, long swig of lime rickey. Icy pastels and pastoral themes await!
Posted by Danielle Bennignus at 3:17 PM No comments:

A brief entry today, to happily report that the cover artwork for the upcoming Singapore Slingers album is halfway finished. As Matt spent the weekend in Las Vegas on a gig, I've decided to let him see the ink-work first - from there, I'll move along to the coloring stage. It looks gorgeous so far - like a fairy tale version of 1920s sheet music illustration. It's an enormous joy to see that my skills haven't faded over the years.

As a keenly devoted fiancee´, I will wait for the CD release to post the artwork here. Mea culpa - but the big unveiling is a moment that belongs entirely to Matt. Updates to come. In the next couple of days, however, I will be scanning in and posting the cheerful Easter drawing that I made for him - I surreptitiously snuck into his luggage just before he left town. It's a charming piece, and I'm sure you'll enjoy it almost as much as he did.
Posted by Danielle Bennignus at 7:12 PM No comments: