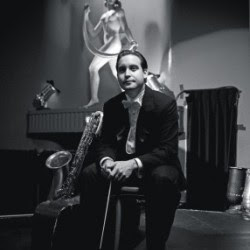 I wanted to post a little update - Matt has been featured in Modern Luxury Dallas magazine this month! Although the article is brief in body, it has a lot to say regarding his love of the music, and the inspirations behind the Singapore Slingers. Have a look at the link provided:

Enjoy!
Posted by Danielle Bennignus at 8:57 PM No comments: 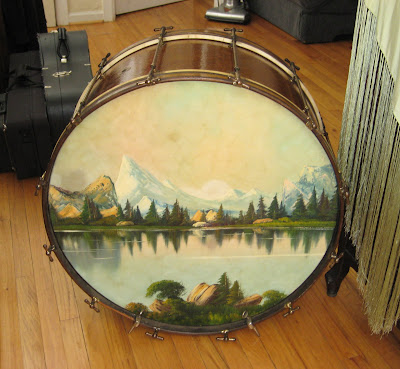 As promised earlier today, I'd like to present two current restoration projects Matt and I are working on. First off, a remarkable 1920s Ludwig bass drum, complete with original, factory-painted head. Matt's been longing for one of these for quite some time, and we were thrilled to win this one in an ebay auction. Rather than have it shipped (at a steep cost and risk in cartage), we decided to take a Memorial Day weekend road trip to pick it up. Well worth the drive, and we were so happy to see good friends while in town.

Being around 90 years old, the drum presented no surprise in its need of tuning up, both aurally and physically. The head boasted a dingy layer of nicotine, grime and insect leavings (don't ask - I didn't), which we cleaned - thanks to the advice of a conservator - with saliva and cotton swabs. The results were pretty astonishing - you can see the contrast below, thanks to the last patch of unrestored paint: 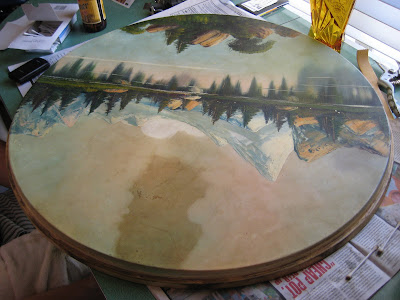 There were also several spots where the paint had chipped away entirely, fixed via a light brushing of spackling, with oil paint touch-ups. This secured the areas sufficiently, and matched well enough that you wouldn't know there was damage, to begin with. 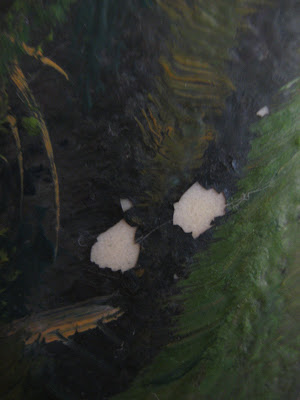 A close-up of the serene, admittedly Bob Ross-ian pastoral scene on the drum head. The whole thing measures at a full 28" - that's a lot landscape, and plenty of deep sound for the Singapore Slingers to enjoy. Our percussionist, the keenly gifted Michael Plotkin, assisted in the re-tuning of the instrument - it's hard not to fall in love with the renewed depth of tone. 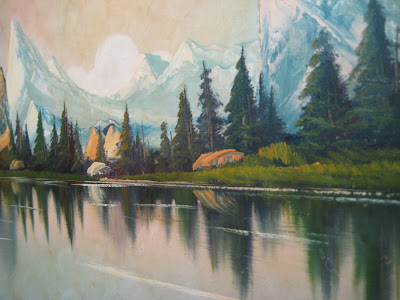 And now to our second project - a set of five late 1920s temple blocks - more percussive instruments, which will eventually sit astride the bass drum. These are possibly scarcer than the bass drum, the sets most often having been broken up over the years. We bumped into this set while in New Orleans, appropriately enough - tucked away in a large antique shop. They weren't in the best of condition cosmetically, but they have all the sound one could ask for. 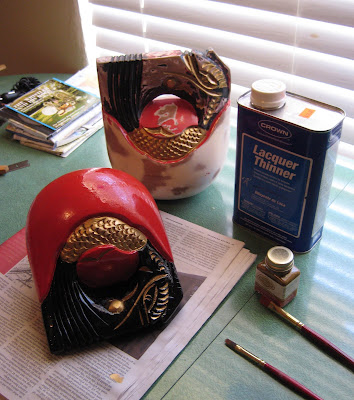 A good look at the lacquers we're using - I'm a devoted fan of One-Shot paints, which provide deep color and wonderful shine. The gold paint is of a "leaf-in-a-bottle" variety - initially I'd wanted to use actual leaf, but figured that would be gilding the lily, pun not intended. These blocks were factory-released having been painted - I chose to stick with that practice. 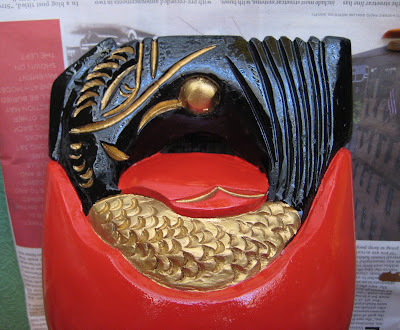 Remarkable scales adorn the blocks, in keeping with the aquatic theme... 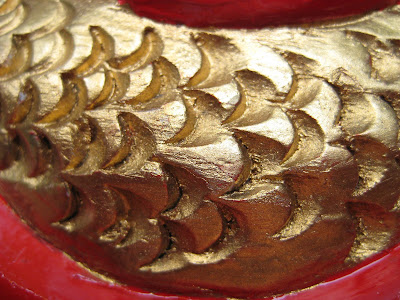 Another, closer look at the fish head. From what I understand, these blocks were originally carved outside of the factories, then shipped raw for painting. This makes a lot of sense to me - the designs seem far more Indonesian/Philippine in nature than something that would come out of the States. 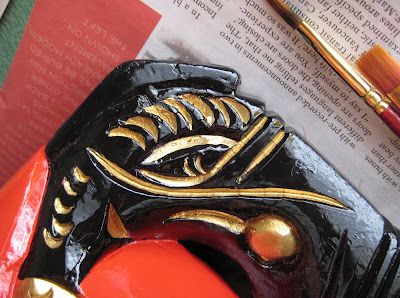 A close-up of one in the restoration process - stripped of chipped and loose paint. When we found them, the blocks were literally snowing red flakes - there was little chance of salvaging what was left on them. As well, a couple of them have structural hairline cracks, which will be strengthened and sealed before painting. We were very fortunate in that One-Shot's "Bright Red" is a dead ringer for the original color - and their paints are strong enough that, once these blocks are brought into the orchestra, the new surfaces will easily withstand the frequent mallet usage they'll be seeing. 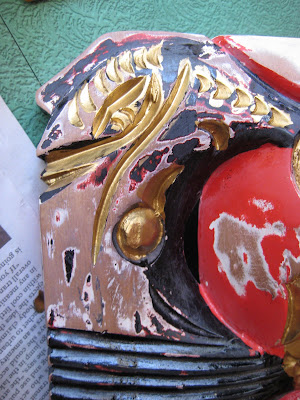 We believe that these blocks are likely from the Leedy company, but they also could have come from Ludwig. Frankly we're a bit stumped, as we've never seen them carved in a "fish" theme before. Usually they appear as little "skulls", symmetrically-designed. Whatever the case, we're very grateful that they came our way, and are doing our best to restore them properly.
Posted by Danielle Bennignus at 2:00 PM 4 comments:

Posters, Past and Present 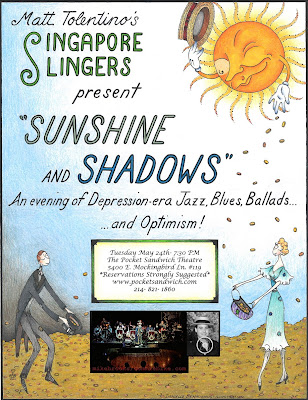 Although I'd planned on an entry featuring our current event illustration, just as I pulled out the camera for several close-ups, I realized that I had completely overlooked the last poster! Inadvertently late, here's "Sunshine and Shadows", from our May 24th Depression-era program.

As usual, I had a lot of fun coming up with a new font... 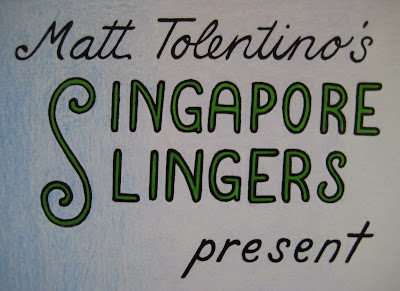 ... and I've been enjoying the heck out of illustrating gentlemen again. The recent posters have been largely female in nature, so, despite how trim and often androgynous my gents tend to be, it's still been a joy to draw them. 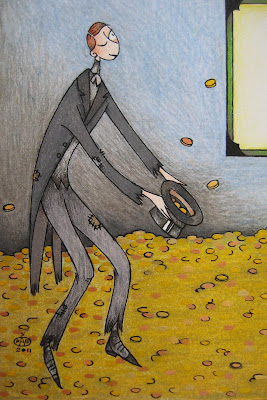 As well, I decided to throw in the sunshine itself, with a distinctly 1930s personality. I'm not usually prone to anthropomorphizing (well... animals, yes - otherwise, no), but the idea of a chipper, look-on-the-bright-side-and-pull-up-your-bootstraps sun, tossing coins down to the thread-worn populace, was too tempting to pass up. Maybe the dancing musical instruments in the last poster started a trend... 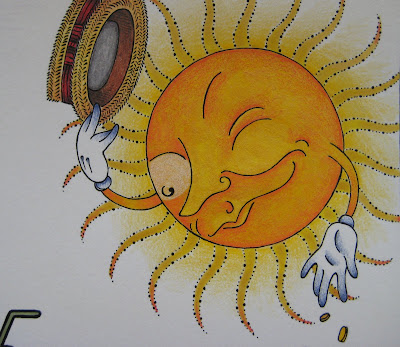 And now on to the current poster, advertising our Patriotic Revue. For the longest time, Matt's been aching to break out the Sousa arrangements, and what better time of year to do so than July 4th weekend? 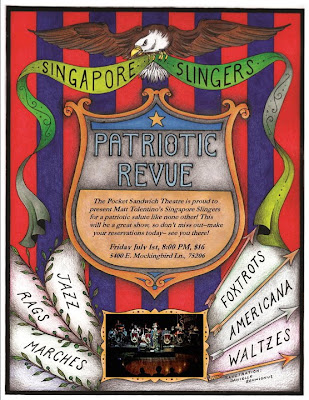 Although I didn't want to come across as too jingoistic, I knew that a bald eagle would have to make an appearance... 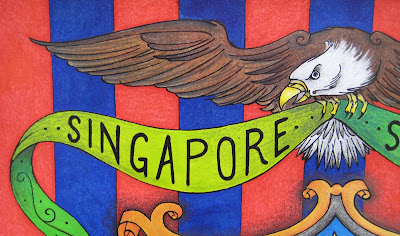 ... and instead of heading completely into traditional American flag turf, I decided to incorporate olive branches and arrows, as frames for the evening's musical offerings. 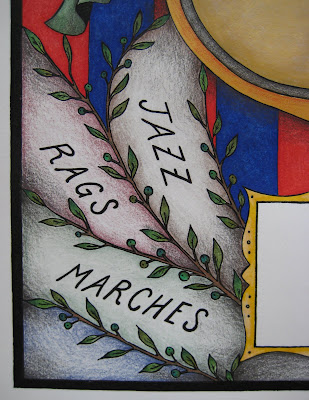 The center shield reminds me of a simplified carving one would find on a carousel rounding board (I couldn't avoid fairground references, regardless of how hard I could ever try)... 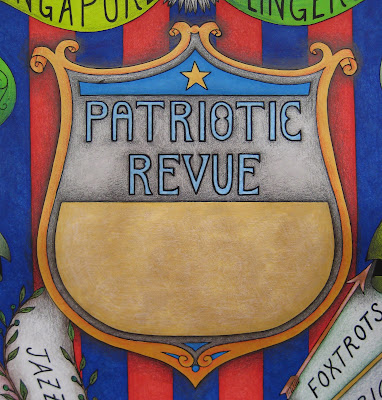 In all, a continuation of the tried-and-true pen, ink and pencil practices I've stuck with for so many years. In the next blog, the working materials are of a completely unrelated nature, although entirely associated with the usual subject matter. A little hint: 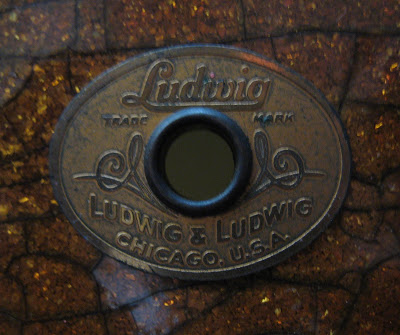 ... See you soon with more goodies!
Posted by Danielle Bennignus at 10:16 AM 1 comment: