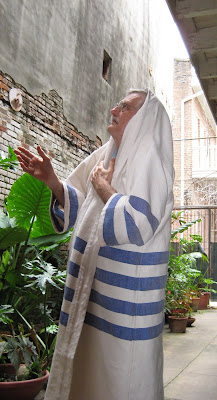 Earlier this week, Matt and I took a couple of days for a return visit to one of our favorite places - New Orleans. This time around, we were lucky enough to meet up with some truly wonderful friends, all just as vintage in musical and artistic tastes as we are - Blaine, a Louisiana native (who has a level of adoration for NOLA that defines infectious), and Richard, who is both a traditional jazz nut and highly respected pioneer in Coney Island preservation. His charming wife Liz joined in the festivities, and all had a hell of a lot of fun. Despite our many new discoveries during this visit, I woefully took only a couple of photographs - frankly, I was enjoying the sensory experience far too much to bother with my camera. But the two photos I did take are gems, and are posted here. 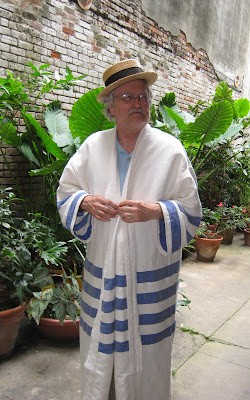 In one of last year's posts I mentioned George Schmidt, and all that his presence encompasses - so it shouldn't come as a surprise that we spent a bit of our visit with him. He's working on a handful of beautiful pieces for an upcoming show - I should have taken photos... I repeat my reasoning, regrettably. One in particular featured one of the finest representations of greyhounds I've seen in a long while - my adoption friends would have loved it. This time around I presented George with the sheik's robe I had promised him - it matches Matt's, and was very well-received. I was delighted when Patty, George's wife, showed just as much appreciation for it as he did - but after all, the ultimate Pharaoh of the Oriental Fox-Trot certainly deserves such a gift. Looking at these photos again, I'm reminded of how gracefully he uses his hands - my late mother was a fiend for hands with character, and would surely have been a little nuts for these. A born artist, to be sure. 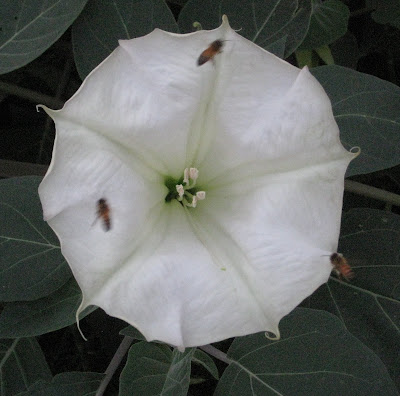 And now, for a little update from the home front, and the little garden that graces our porch. This year the star attraction has been the Sacred Datura plant - it's in its second season, and coming up like gangbusters. The honey bees in particular have taken an enormous liking to it, crowding around the blooms at sundown. 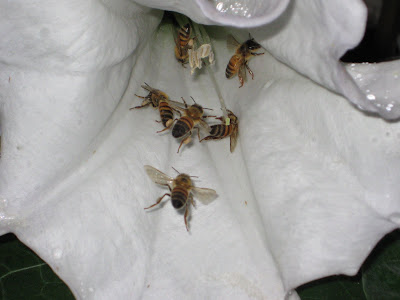 Granted they are large flowers, but to see seven bees busily gathering pollen in a single blossom is pretty incredible stuff. The above photo still surprises me. Of course, bees aren't the only visitors we get - I'm almost certain that this is a tobacco hornworm moth. Regardless of its specific name, the thing was enormous, fooling us into believing it to be a large hummingbird. Just compare it to the bees in size - that should give you an idea! 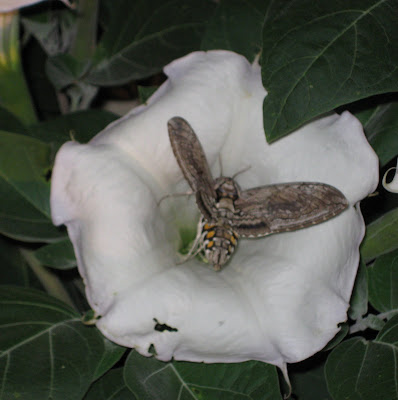 Finally, more for the hell of it than anything else, a little photo of Brick and Doo-Dad. Each day that passes makes me prouder of them both - Brick for learning to share his home after some years of single-hood, and Doo-Dad for finding his place in our family, and respecting Brick's limits of patience (being a senior pup and all). Seeing these two fit into brotherly roles brings me a lot of happiness - I figured I'd pass that cheer along. 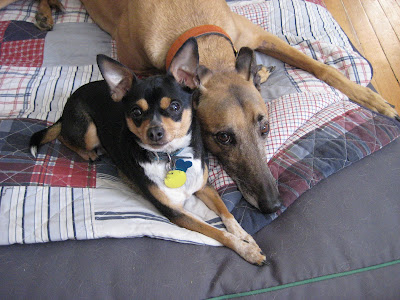 As a little side-note, I'm really looking forward to seeing what NOLA's influence brings, sewing and illustration-wise, this time around. Visiting several galleries and clothing boutiques was inspiring, to say the least...
Posted by Danielle Bennignus at 5:10 PM No comments: