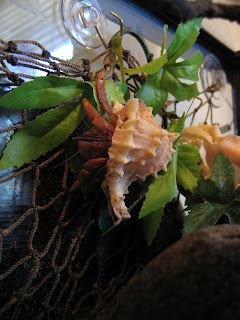 Can you believe it's been since January that I posted?  Ridiculous, and inexcusable... but hell, I'm back, and happy to be here.

First of all, I have a new blog:  www.dfwhermits.blogspot.com - focused on my hermit crabitat, and efforts to find new homes for hermit crabs in the process of relocation.  The needs of these beasts are largely misunderstood, and I'm doing what I can to help folks learn about how to care for them properly.  Perhaps a bit off the wall - but these animals have won me over just about as much as retired greyhounds have.  Crustacean compassion, as it were.

I'm beyond thrilled to say that yes, I am busy - in truth, currently working on a new book illustration project.  What with the usual time that needs to pass through the planning stage, I was hesitant to mention it, but the project is moving along in earnest, and I'm very, very excited to be a part of it.  More to come - you'll have to wait for the Big Reveal, just like everyone else!

With the coming summer season, I'm also preparing to work up some new patterns - and I still have yet to feature some of last year's work!  A fashion show of sorts is in the near future - stay tuned.

Matt's work with the orchestra and smaller bands has been going gangbusters, and they're sounding better and better with every performance.  As well, he has a new album out - visit www.matttolentino.com for the information.  New venues, new audiences and more - and a marvelous show coming up in August.  Again, keep your eyes on the updates... 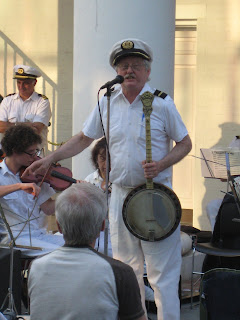 (Let's face it - there's no avoiding this man when you visit this blog.)

We were ecstatic to finally hear the New Leviathan Oriental Fox Trot Orchestra (THE inspiration behind the Singapore Slingers) at a recent performance in Lafayette, Louisiana - the impeccable sound of this ensemble, on a beautiful spring afternoon... remarkable.  It was a true red-eye drive - six hours there, listen, dance and catch up with George, Patty and the group - and turn right back around for home.  And well worth it, I assure you.  We will be visiting New Orleans soon enough - until then, this was a well-appreciated taste of what we really, really dig. 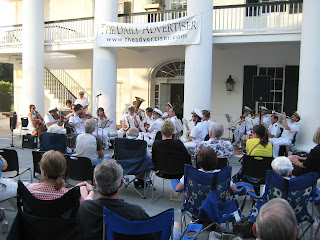 A brief update, but it IS 1am, and the crabs are calling with their nocturnal antics.  I promise to drag myself away from them long enough to post new photos, and let you know of what else we're up to.  Until then, check out my other blog, and consider Googling and purchasing a Leviathan album or two.  Divine musicianship!
Posted by Danielle Bennignus at 11:09 PM No comments: 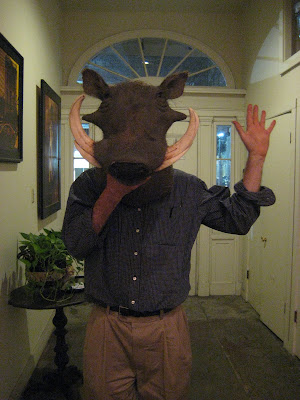 Matt and I have been feeling the itch lately, and realized it was high time we visited New Orleans again. This time around, we were infinitely blessed to meet up with my brother, Christian, and my oldest/dearest friend, Tony. As well, it was only natural that we should meet up with the much-lauded celebrity of this blog (as well as the outside world) - George Schmidt! 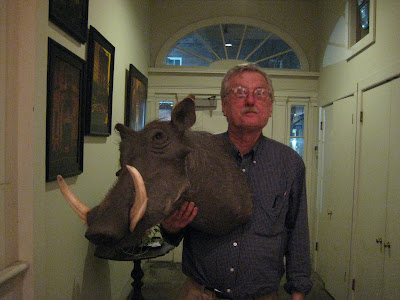 A large part of our visit centered around the opening of his show at the University of Louisiana Hilliard Art Museum: "Satire, Scandal and Spectacle". This unforgettable evening found us, along with a group of George's fans, models, family and friends, on a bus trip to Lafayette for the show. Along the way we enjoyed the beauty of the Cajun region, a stop in Franklin, a boxed dinner and more - and the show itself was incredibly inspiring, uplifting and filled with the human side of history. The exhibit featured his larger works, centering around the history of Louisiana - Roman law, Jean Lafitte, Storyville, Mardi Gras and political events were only the beginning. His work is incomparable, and only part of what makes George a very special man.
A group photo after the trip, including Tony (next to me), Christian (next to Tony), and Patty Gay. Patty is George's wonderful wife, who we finally got to spend a good deal of quality time with. A true leader in the fight for historic preservation, and a truly endearing woman. What the modern lingo would term a "Power Couple". 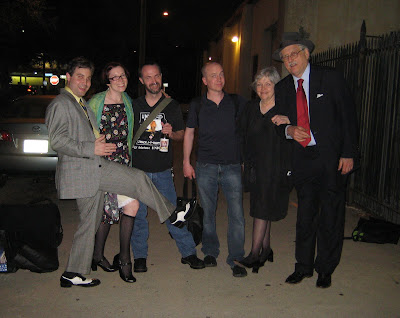 Another photo from the bus ride - George had brought along a gifted banjo player for the ride, and Matt joined in on the accordion. Everything from ragtime to German waltzes to traditional jazz was played - I only wish I remember what song was being sung, here! 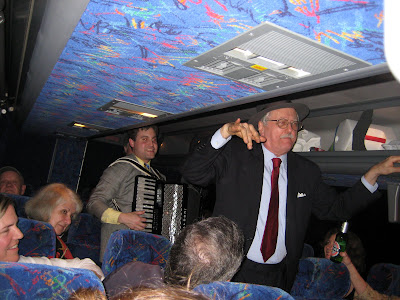 Finally, two treats from our first night visiting. As usual, we spent some time in the garden at George's studio, trading jokes, chatting on history, listening and learning... the constant highlight of our New Orleans journeys. After a proffered voodoo lily was planted among the jasmine and angel's wings, we headed upstairs, where wine and cheese were served. An honor, to be sure... and eventually Matt found his way to the piano, and played a few tunes. 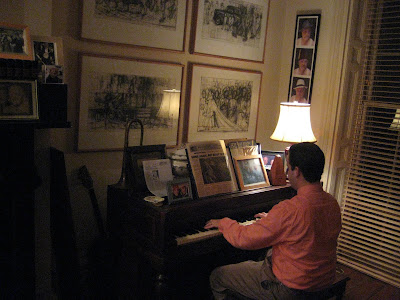 True, there are myriad other things to do in New Orleans - and we do indulge in them. In such a city that never stops giving and giving, we are more than happy to eat to excess, drink perhaps a bit too much, feast our eyes on the beauty of endless architectural wonders, soak in the unbelievably historic depths of the place... embrace all that we are able to in a short time. But invariably, we find our way back to Julia Street, to laugh, think, reflect and learn - be inspired - by one of our world's great living artists, and a family that champions history and culture. As an illustrator, I inevitably find renewed inspiration, increased respect for my gift, and a better sense of responsibility to keep creating - strength in quality, as well as quantity. I told George that I see him as an adopted uncle, to which he replied, "Good lord! Who'd want me in the family?!" I could certainly do worse!
Posted by Danielle Bennignus at 3:30 PM No comments: 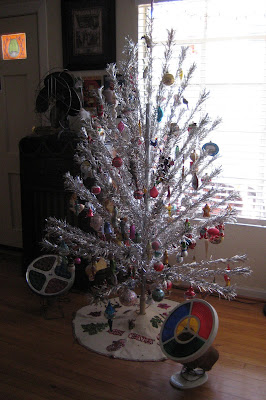 Although it's a bit late, I thought I'd take the opportunity to share a view on our annual Christmas display - perhaps better termed a "Kitschmas Display". For a little over 15 years, I've put up my late 1950s aluminum tree, for two reasons. Firstly, because I've had an obnoxious weakness for the tacky things ever since I saw one for the first time. Secondly, in honor of my late mother, who surprised me on Christmas day with this tree... which happened to be the aforementioned "first vision". In her usual, thoughtful way, she timed the entire gifting process into a great production, involving drama, despair and a beautiful wind-up of relief and celebration. I don't think I've mentioned her often enough in this blog - she was the Real McCoy. On to the ornaments! 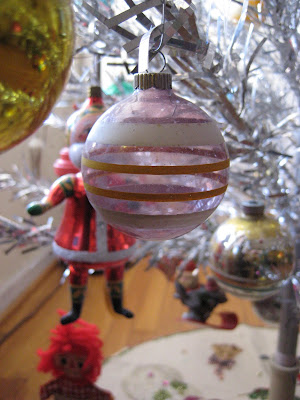 This is one of my long-time favorites, likely a Shiny-Brite dating from the WWII era. I recently learned of the company's practice of painted stripes on clear glass, a wise move during a time of rationing and conservation. In this case, less is more. It reminds me of Easter, with white, canary yellow and lilac tones.

My brother kindly sent me this beautiful 1950s flocked icicle piece, along with a slew of other vintage decorations. It's incredibly graceful and fragile as the dickens - pure in nature, likely being the most dignified ornament on the tree year after year. 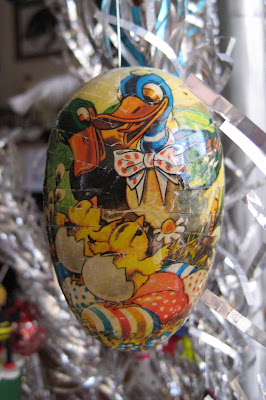 During their years together, my parents gave each other Easter baskets, but tucked inside German paper eggs. This is a survivor, most others likely lost in moves, or crushed over time and under family records. Luckily, it's small enough to hang from the tree, not causing undue stress to the tinseled boughs. 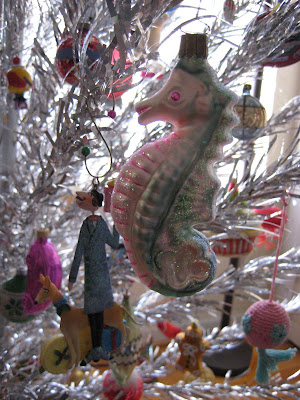 A nifty Waterford seahorse ornament, reminding me of my happy years as a display technician at the company's Madison Avenue showroom. Waterford's mercury glass ornaments are like explosions of color, vibrating against the silver strands of this tree. No evergreen could show them off anywhere near as much. In the back, you can see a "Giddies" ornament design that I created for the company about 5 years ago, for a second collection that never hit the shelves. A shame, as they outdid the skaters designs hand over fist. 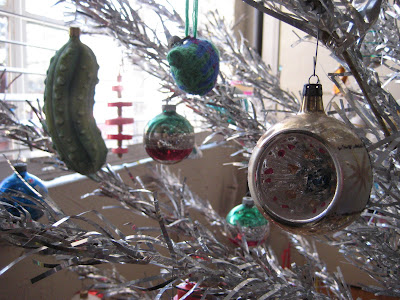 A nice little grouping, including the German pickle. Ours is ridiculously easy to find, thanks to its size and environs - at least we made the effort. Here you can also see one of our wooden pieces, as well as a Peruvian crocheted bird. A number of these more organic items came from the collection of Otto Thieme, the late, remarkable curator of costume, textiles and African arts at the Cincinnati Art Museum. Oftentimes I think of him and his guidance years ago, when I donated a Paul Poiret robe to the museum (another story for another day) - he is well remembered during the Christmas season, thanks to his ornaments. 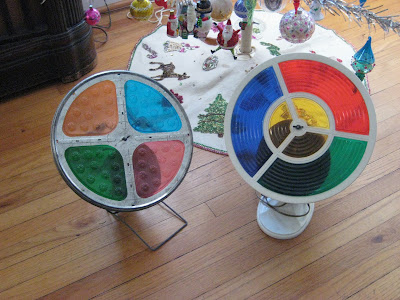 Finally, our color wheels! Aluminum trees and string lights Do Not Mix Well, thanks to the risk of exposed metal against electric wiring. The solution? Rotating gel lamps, that cast alternating shades against the silver boughs. At night, it's a wonderful effect - and in this case, two are better than one. You can also see the incredible tree skirt that Matt's great-grandmother made by hand, likely in the late 1940s. Outside of many of the ornaments, most of the setup is original, from the wheels down to the tree itself, made by the Revere Aluminum Tree Company (model T-45). I hope you've enjoyed the little tour - I'll likely be revisiting this post come August, if this Texas summer is anything like the last!
Posted by Danielle Bennignus at 2:53 PM No comments: